Hey folks, nothing better to do on this dismal rainy day so I put up some pictures and wrote a few new bits on my blog. What the hell is a blog anyway?
Enjoy..

Right, stop looking at those pictures of poor old CHX.
Wonder what I'm up to?
Well, here is a picture of me hard at work.
No, not the handsome chap in the foreground, that is Ryan, whom some may remember from when skydivers operated out of the terminal at Manapouri.
Or the lovely strapped tightly to his chest.
No, I'm the one you cant see plummeting back to earth in the PAC750XL.
What a fantastically efficient working aeroplane!
We typically turn around loads to 16000 feet in 17 minutes.
I love and reminisce often about the glory days fanging around in Cessna's but this is a whole new level.
And while tailwheels will always be my weapon of choice, nothing can compare to the sense of achievement one has when one is responsible for the viiiiiiiiIIIIIIIIISHHticktickticktickfoooom of a turbine.
There you go. It ain't really news, but someone should start putting things up on this excellent website. Eh?

On the evening of March 12th George failed to outclimb trees after a touch and go in Jodel CHX.
It fell heavily, the impact tearing the entire nose section off, rupturing the fuel tank and destroying the right wing.
Miraculously, He emerged with deep gashes to his legs, covered in avgas but otherwise unscathed!
Au Revoir, Jodel!

-  Here is the story that appeared in the Fiordland Advocate last week..

On Sunday 17th the Fiordland Aero Club held a fly in, the occasion being a Navigation Skills event combined with a ceremony to give thanks to Meridian Energy for their contribution to the purchase of the club's new trainer.
Aircraft from around Southland attended the event which took place in magnificent Fiordland weather at the Aero Club's hangar at Te Anau Airport, Manapouri.
John Twidle, representative for Meridian enjoyed a flight in the Alpi 200 before accepting the thanks of Club Captain Murray Hagen and Secretary Lynne Stewart on behalf of the club members.
In return John referred to both the new aircraft and the club itself being a class act, and that learning to fly was a valuable opportunity for local youth.
John took the controls during the local flight and could not believe what microlight flying had evolved into, in fact the new trainer had itself been flown down from Whangarei in one day with a total flight time of just over 7 hours.
Senior instructor Peter Garlick said the flight was uneventful with perfect weather and just showed what modern microlights were capable of.
Recently the club has gone from strength to strength with a growing list of members and will soon hold a flying scholarship for High School students with the reward of 10 hrs flying training towards a career in aviation.
The student will solo in that time and the hours can be credited towards a commercial pilots licence. A further scholarship open to the wider community is possible in the future.
Further grants to support the scholarship have come from Southern Trust and Te Anau Lions, Fiordland Aero Club would like to acknowledge their support.

A bummer for Allan who after only a short period of ownership now only has the battered hulk but vivid memories of a reasonably unique event.

Poor old FYI, however I never really regarded it with awe and now refer to the type as the Avid Crasher.
-  Congratulations to Kevin Flynn who went solo today, 18 Jan 2013.
Good one Murray for beating him in to shape.
Kevin is keen on the Bantam, his next challenge is to solo in that!
Good on ya Kevin, welcome to the ranks of those who enjoy the sky as a playground.
-  Also well done to Mike Blomfield who sat and passed all his exams with excellent marks. His tutor must have been awesome, it wasn't me.
-  Thanks are due to Syd and Kevin Harvey, the owners of SYD for leasing us their machine.
It really has opened a new era for the club and a lot of us are grateful to them for introducing us to the world of modern microlights.
Apparently Kevin may yet learn to fly, I hope so, it would be a pleasure to keep SYD around, its been a good plane. 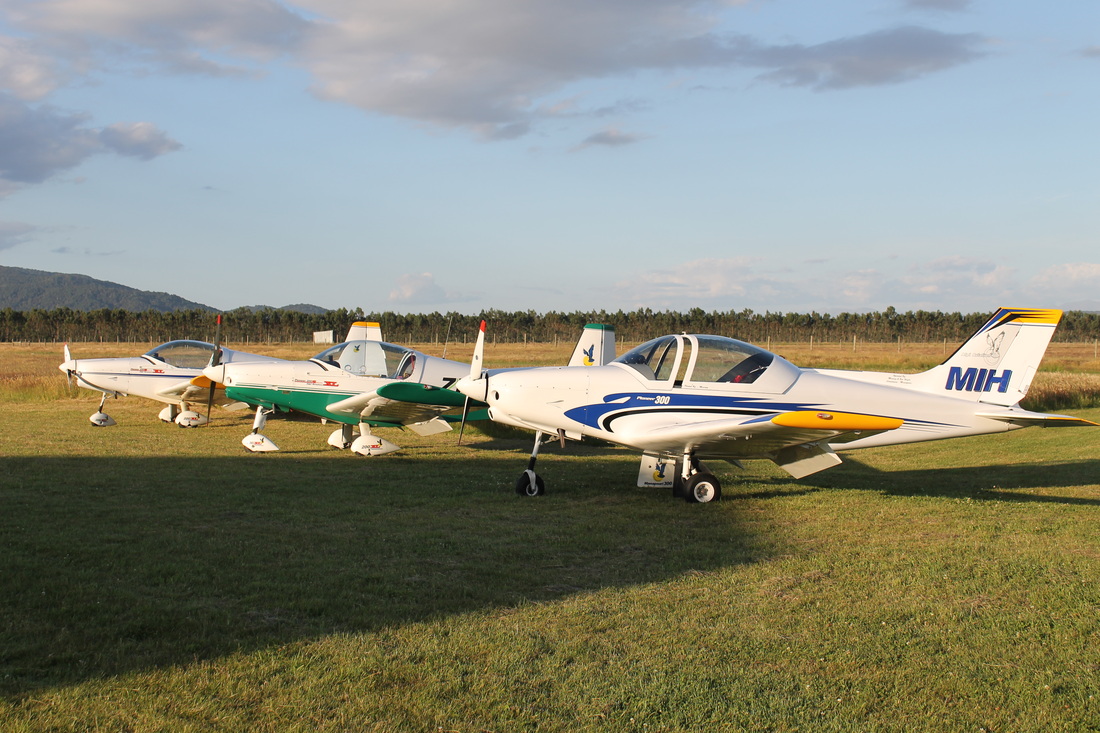